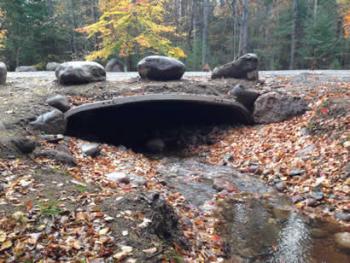 The adoption of state level stream crossing standards is a great starting point for influencing crossing designs at a broad scale. The process of developing a set of standards can provide an important forum for discussion among environmental and transportation agency staff as well as conservation groups and others. Several states have adopted standards or guidelines for stream crossing design:

Stream crossing standards may be referenced in general permits or legislation, such that projects for new or replacement stream crossings that meet the standards can proceed more quickly.

Formal reference to a set of standards has proven to be an important requisite for accessing post-disaster recovery funding. If the state or municipality has adopted a set of standards for crossings, then post-disaster recovery funding may be used to improve rather than simply replace stream crossings that sustain major damage. Regulations for Public Assistance funding from the Federal Emergency Management Agency (FEMA) specify that standards be formally adopted, implemented, and consistently applied prior to the disaster. If these conditions are not met, then recovery funding may only support repair or replacement of a damaged structure to its pre-disaster condition, even if the pre-design condition is problematic for aquatic organism passage and flooding. (If a structure has a documented history of repeated damage, another FEMA funding stream, the Hazard Mitigation Grant Program, may be used to pay for culvert improvement.)

This analysis of lessons learned from Tropical Storm Irene in Vermont describes the importance of strong and clear standards for ensuring eligibility for post-disaster funding assistance.

While municipalities often rely on the standards of their state General Permits, in some cases municipalities may also adopt, implement, and consistently apply their own set of infrastructure standards. This will not only boost the resiliency of their roads and stream crossings, but also help ensure eligibility for post-disaster assistance from FEMA. In some cases, adoption of these standards may also allow for a greater share of state funding from various programs. Two examples of municipal standards are below: